The project was an effective rebuilding of once derelict buildings at Kirkmichael, Black Isle. The buildings and part of the graveyard are listed as a Scheduled Ancient Monument and the building is also Category B listed. The original medieval ecclesiastical building ceased to be used for worship in the 18th century after which its condition deteriorated and in recent times had fallen into significant disrepair.

McGregor Bowes’ appointment as lead consultant was in 2013 and works started on the restoration in 2016. The works included: masonry repairs; a new roof using as much of the original material as possible and matching reclaimed slates; new solid oak doors and bespoke fixed-light windows; new Caithness stone floors; new paths that were graded to improve access whilst blending with the existing levels; a new green sedum soft-cap on an existing monument.

The final part of the project was the interpretation and display element, the design of which was carried out by McGregor Bowes, who also acted as main contractor, working with StudioSP.

This created a display of medieval ornamental grave memorials that are recognised as being of considerable archaeological interest, which were relocated for conservation purposes inside the Nave of the building, and adding interpretation throughout the site.

The display includes “as-new” carvings of existing medieval stones to illustrate the original appearance of two gravestones, on top of bespoke seat displays in the Nave and Chancel of the building.

The restoration observed ICOMOS and Burra Charter guidelines and Historic Environment Scotland’s comments. Analysis of the existing mortars and harling was carried out by the Scottish Lime Centre Trust and recipes were formed from these. A petrographic analysis of the stone was made and replacement stone was chosen from this. Numerous other historical, archaeological, architectural and structural reports were carried out at various stages.

A main part of the interpretation scheme was the installation of two benches with “as-new” stone displays of existing medieval stones to illustrate the original appearance of gravestones, on top of bespoke seat displays.

Restoration is inherently sustainable. Materials were re-used where possible; where new materials were required local materials with a lower embedded energy and high quality materials that would have a long lifespan were used.

The building was previously an eyesore on one of the main transport routes and the cause of considerable community embarrassment. It has now changed into a source of local pride.

The building ties in with other attractions in the area and will become an important link in the heritage narrative for visitors and locals.

The project sprang from local community concern about the deteriorating condition of the buildings; a Trust was formed and a programme of fundraising was started. The Trust worked for more than 15 years to raise the £750,000 project cost (£370,000 construction cost).

The local community has been involved in all stages of the project including the works, with a large number of volunteers working on: clearing the site; archaeological digs during the works; installing the interpretation and displays.

During the works, there were “open days” where demonstrations of traditional techniques were carried out. The Trust had tours of the site prior to the works, which were included in these open days. There have also been lectures based on historical research. This research is added to the Trust’s website.

The building was included in Doors Open Days and the organiser said that:

“…it was our top Doors Open Day venue for 2017 at over 200 visitors on a less than brilliant weekend weather wise! The feedback from the visitors is great with lots of praise for Jim Mackay (the Chair of the Trust) and the whole team.”

The building was opened by His Royal Highness the Duke of Gloucester who said it was an exemplar of a community heritage project.

When the works started the building was in a state of ruin and it would not have taken long for the building to be lost. As well as conserving the building it now houses a unique collection of nationally significant gravestones that were saved before erosion led to surface relief being lost. 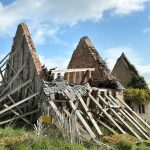 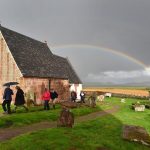 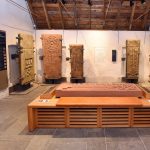 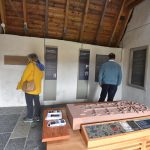 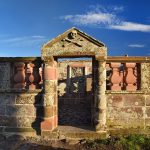 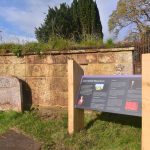